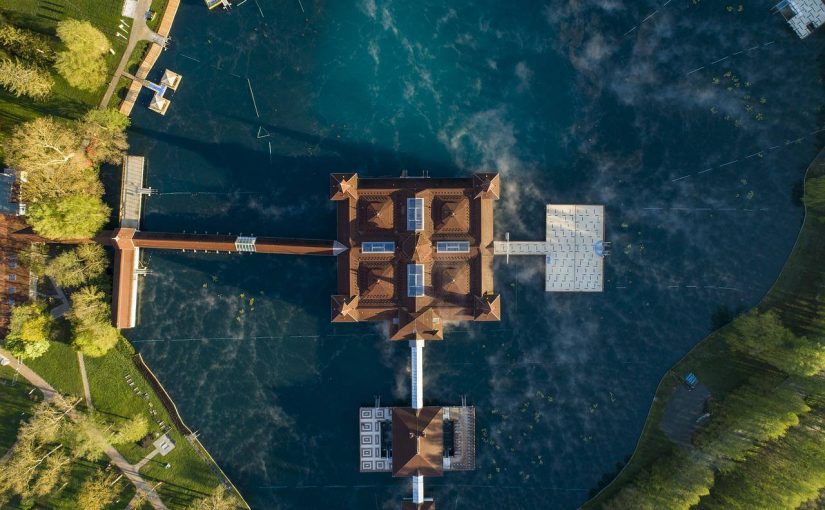 What’s the best way to present a vacation at the thermal lake Heviz? An excellent road connection, a green covid area, something new, and no Slovenians, only adults – these are some of the key ingredients for a successful summer vacation after the main holidays.

The thermal town of Heviz is about 3 hours away from Ljubljana, but if you leave the children with your father- and mother-in-law in Celje, eat breakfast and drink coffee, it only takes a short 2 hours to drive to Heviz, most of it on the highway, only the last few kilometers on the regional road.

We almost forgot about the Hungarian vignette, despite needing it when we visited Budapest during the New Year period a couple of years ago.
It occurred to me at the last minute that we had forgotten something. But we did not panic, the Hungarians use an electronic vignette system. We bought it at one of the last gas stations on the Pomurje highway. You tell the seller the registration number, and the type of car, pay 15 euros, and voila, you are already in the Hungarian system. No stickers, no packaging.

Pince is where we crossed the border with Hungary. Both sides have removed their border facilities years ago, so there’s no border. There have also been no narrowing of the roads or possible checks on the PCT since Hungary was green at the beginning of August, meaning no masks are required.

A vacation from a vacation

An idea for a vacation after the big family vacation came up once at the end of the school year. Wouldn’t it be great if Levinja and I could escape somewhere alone after our vacation?

Valencia sounded tempting, flights from Trieste are cheap. But incomplete vaccination and the transition of the Iberian Peninsula to red did not promise anything wise either. Tuscany, Italy? Ha, close and by car, but not in August. During the corona period in August (ferragosto), Italians took a massive vacation at home. And if they weren’t vacationing, at least they weren’t cooking, so the restaurants were full. Maybe another time.

Slovenia was not a serious option. Prices have increased crazy because of tourist vouchers.

There was a story on Twitter about a ridiculously good lunch with a drink for 30 euros somewhere on the shore of Lake Balaton (Hungarian Balaton, German Plattensee).

Then, Levinja took Booking into her own hands, and found Hungary herself, or rather Heviz.

Bonvital – a great hotel for a great price

We slept in the Hotel Bonvital, located on one of the main streets of Heviz. Booking through their website was cheaper than Booking.com.

The hotel was at least at the level of four stars compared to similiar hotels in Croatia. Spacious rooms, excellent half board, pleasant indoor pool with saunas. Paid parking was at the entrance to the hotel. In terms of price, I would say that it was about 20 to 30% cheaper than similar Croatian hotels in the same period.

We had lunch in one of the inns, most of the time we had the excellent goulash soup. It was only the first day we made a mistake and ordered a plate with mixed meat, and for the next couple of hours I voluntarily ate vegetarian.

Every night quite a few bars had live music – solo or duo. A real break without Croatian hits.

Heviz – the largest active thermal lake in the world

The main attraction of Heviz is, of course, the thermal lake. Hordes of real and working retirees flock to the lake every day. Heviz actually means thermal water.

You can swim in the lake all year round, as the water temperature is always pleasant, even over 30°C in summer. Apparently, the water is slightly radioactive, so they warned us about it every now and then over the loudspeaker. This is because you shouldn’t stay in the water for more than 20 minutes at a time. And exactly no one follows this rule. Although the water does not look very clean because of the vegetation, there are many water lilies, the springs are so powerful that the entire water in the lake is automatically replaced every few days.

The entire complex of the thermal lake is also interesting due to the architectural placement of auxiliary buildings, which stand on pillars on the lake. There are changing rooms at the entrance, and then plenty of space for deckchairs and steps to access the lake.

Already on the first day, Levinja and I marveled from the hotel balcony at the walkers destined for the lake, who, in addition to the obligatory beach equipment, were all – without exception – equipped with water worms. Small shops also sold them.

At the hotel reception, we got slightly more favorable tickets for swimming, and with the purchase, the receptionist also offered us a free rental of worms. Ok, we’ll take them for this money.

When you swim in the lake, it immediately becomes clear to you that you wouldn’t be able to go very far without a worm. The water is heavier, although it doesn’t look like it, it is denser, so swimming is much more difficult. That’s why you comfortably place a worm between your legs and indulge in thermal relaxation.

In addition to the worms that dominate, swimmers also help themselves with classic water rings and gloves.

Go for a ride with an electric bike

Heviz is only less than 10 kilometers from Balaton – Lake Balaton. Perfect for renting an electric bike at the tourist center which was located at the beginning of our street. Renting an electric bicycle for one day costs only 16 euros, which is almost half as much as in Slovenia. And when I say ‘one day, it’s 24 hours.

We first went down with our bikes to Blatenski Kostel or Keszthely, a nice place by Lake Blatno. We continued along the northern side to Szigliget. We had beer and pizza there.

When you are on a bike, you have time to observe the landscape. We drove past several beaches. They were mostly quite full, probably with local guests. For us, used to the Adriatic Sea, the whole thing seemed rather pathetic and not at all inviting. Since it is a lake, the shore is grassy and the water, as befits a muddy lake, muddy.

If the time was right, we would take a cheap ferry to the other side of the lake to Balatonkeresztúr, from where I would then return to Heviz on the lower side. Unfortunately, ferry schedules are quite varied.

In the end, we did about 70 kilometers with electric bikes. And even though the e-bikes were quite touristy and clumsy, like installing a battery on a Ljubljana Bicycle, the ride was really fun and undemanding. Even the many slopes were very easy.

Since we still had some battery left when we returned to Heviz, we drove to some attractions in Heviz.

Instead of a conclusion

A great experience that will have to be repeated. If not in the next years, then in the next decades.